Why Barn Fire Safety Needs to Be Taken More Seriously 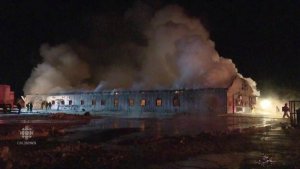 When we think of "fire safety" we typically think of protecting people and property from the devastating effects of fire. However, the recent string of deadly barn fires across Ontario has been a harsh reminder that we need to be putting a larger focus on protecting animals, as well.

What's the common factor in most of these fires? Fire sprinklers and other life-saving fire protection systems were not present. Under the current Ontario Fire Code, barns are not required to have sprinkler systems or smoke detectors. In wake of these tragic incidents, people across the nation are calling for improved fire safety measures in order to protect the wellbeing of animals. We can only hope that this string of tragedies can begin to foster dialogue about this important topic and encourage every property owner to install fire sprinklers.

As Lorraine Carli, vice president of Outreach and Advocacy for NFPA, explained, "While it's impossible to say whether or not sprinklers would have prevented such massive losses, it's reasonable to assume sprinklers would have slowed the fires, giving fire services more time to quench the flames and allowing more animals to escape to safety."

To learn more about rural fire safety and how to reduce the risks for barn fires, click here!