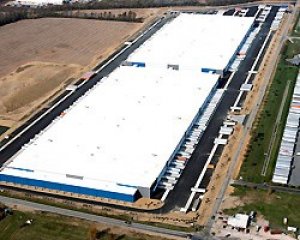 February 17, 2009 - The VFP Fire Systems West Chester, Ohio, office is putting the finishing touch on one of the largest new distribution facilities in the Midwest. The Whirlpool Distribution Center, located in Columbus, Ohio, is 1.6 million square feet: large enough to hold 28 football fields.

VFP installed 17,650 K-14 ESFR sprinklers and just under 34 miles of sprinkler pipe in the new buildings. Installation was complete within 4,500 labor hours, or just more than .25 hours per sprinkler head. The project began April 2008 and was complete October 2008.

"VFP did a fantastic job," said Pizzuti Cos. Senior Vice President Mark Schmunk. "They went above and beyond what we see from most subcontractors."

"This [project] was a real challenge due to the sheer size of the job and the schedule we needed to maintain," said Garthaus, VFP contract manager."

"Adam Martin, with the help of our Design Manager Lloyd Wright, did a fantastic job staying out in front of the installation dates," Garthaus said. "And our field crew, led by VFP Foreman Danny Hirsh, stayed ahead of schedule throughout the project."

The field crew finished the job on time, to the delight of both Pepper Construction Co. and long time customer Pizzuti.

"From price to design to installation and in working with the local building department, VFP was an absolute pleasure to work with," Schmunk said. Schmunk also had high praise for Tim Garthaus, who sold the project, and the "coconut doughnuts" he brought to the weekly project meetings.

The facilities were built by Pepper Construction. The project developer was Pizzuti which has a long-standing, successful relationship with the Benton Harbor Michigan appliance maker.